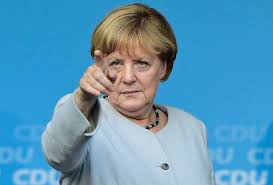 What’s next? Dissolving the Reichstag and declaring herself Fuhrer? The total dominance over German life by Chancellor Angela Merkel is almost like the good old days of the 1930’s. Her decision to cancel her resignation comes as no surprise, in fact it was predicted on these very pages when she announced she was stepping down. (See below).

The reason for her change of heart is that her chosen successor, Annegret Kramp-Karrenbauer, is not matching up to Merkel’s immense stature and this has left the all-powerful Chancellor furious. Merkel believes that her successor must be in her own image and must continue her globalist policies.

Chancellor Merkel has not spent her entire political life building an unchallengeable powerbase in Germany and realizing the dream of her notorious predecessors of ruling a single European state to have it put in jeopardy by a chosen acolyte that doesn’t cut the mustard.

One is bound to ask how a deeply flawed person like Angela Merkel can accumulate so much power that she can dominate the domestic and European scene and continue to rule on a whim because she doesn’t like her successor.

Her party, the German CDU, and the ruling Presidents in the European Union have either been blackmailed or bribed or they lack the testicular fortitude to assert themselves and challenge her dominance.

The reality is that Germany and the European Union are being governed by the bloated ego of a woman many people believe to be mentally unstable with megalomaniac tendencies.

The imminent danger is that Chancellor Merkel is not only controlling the present, but she is also attempting to control the future of some five-hundred million people in perpetuity.

This reluctance to leave the scene when their time is up is not confined to the German Chancellor. Although she is no Angela Merkel, Great Britain’s Theresa May is still clinging onto power when she should have gone after her disastrous showing in the 2017 general election.

She should have gone again after her disastrous showing in the 2019 local elections where her party lost some 1,300 council seats but she’s still there. Days after announcing her resignation and becoming a lame duck Prime Minister she attended a summit of the European Union and met the press afterward telling her yet to be nominated successor that her strategy is the only possible one.

With the rise of globalism and supranational government this practice of refusing to relinquish power is becoming more prevalent. Even when the globalists are defeated in an election, they refuse to accept the result; they use everything in their power, including dirty tricks, to prevent the new administration from governing.

As the world can see, the result of Brexit referendum is being ignored with a call by the globalists for a second referendum where they will rig it to produce the ‘right result’ to overturn the first.

It is now three years since the Brexit referendum where the British people voted to leave but they are still locked in unable to free themselves using the legitimate democratic process.

In the United States of America, the Democrats, including Hillary Clinton, are refusing to accept the result of the 2016 Presidential election and are openly trying to remove President Trump from office.

In the process of executing this coup d’état they are preventing the President from governing using every dirty trick in the book.

If the globalists succeed and the democratic processes of western civilization are undermined to the point where they are democracies in name only, nations shall have a new birth of tyranny and that government of the few, by the few, for the few will be instituted and liberty will perish from the earth.

Angela Merkel To Stand Down - Don't Bet On It

Posted by Daniel Thomas at 5:56 AM