The Brexit Party - The Fightback Against the Political Class Is On 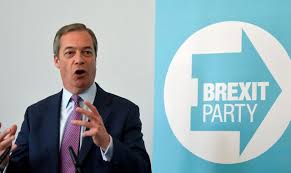 After seven years of war and sacrifice the British people trusted their political representatives to do the right thing so that they could raise their families in the prosperity they believed that peace would eventually bring.

As the years passed by that trust was abused to the point where the political class became a law unto themselves and they believed they knew best how the people should be governed.

The relationship descended further into mutual contempt and has now deteriorated into open warfare between the political class and the people they loathe.

Over the decades the political class assumed the Divine Right of Kings to rule unhindered by the people. This Right was once wielded by dictatorial monarchs before the English Civil War transferred that right back to where it rightly belonged.

Taking it upon themselves to institute supranational government, Parliamentarians of all political persuasions have been slowly transferring their legislative responsibilities to an unelected elite in a foreign country without consulting the people.

The ruling elite in Brussels, some of who were enemies and collaborators during the war, took full advantage of their new powers and encumbered the British people with a tsunami of oppressive rules, regulations and laws while simultaneously looting their economy.

With a new generation of permanently offended, celebrity obsessed snowflakes it appeared that the old bulldog spirit that saw off the Kaiser, Hitler and the Axis powers was gone forever leaving Great Britain doomed to become a province of a German controlled United States of Europe.

The Brexit referendum and the subsequent betrayal by the political class has changed all that. Their furious reaction to the decision of the British people to ignore their campaign of disinformation and take back their sovereignty has exposed them for the arrogant, entitled, petty dictators they are.

This treacherous behavior has woken up the British people from their media induced slumber and they are fighting back with a passion that we all thought was lost.

Led by the charismatic Eurosceptic veteran, Nigel Farage, the new Brexit Party has tapped into the disgust and bristling contempt for politicians; its meteoric rise in support is threatening to end the cozy two party system that has governed, and misgoverned, Great Britain for a century or more.

Every promise made by the politicians during the referendum and general election campaigns have been broken. The laws that they themselves passed through Parliament to enact the will of the people they have ignored.

They are using every procedural trick in the legislative book to rob the British people of their birthright to be the independent, self-governing, sovereign nation their ancestors fought and died for.

In conclusion, the Brexit Party is barely a month old and it is already leading in the European Election opinion polls. If this popularity is translated into votes then it will spell the end not only of Prime Minister, Theresa May, but the rotten political class that she represents.

To learn more about The Brexit Party visit their website  here.