The Empire Strikes Back Using An Imbecile Of The Highest Order 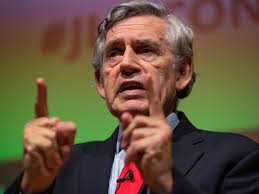 With barely three days to go before the most important election in a generation the state is going after the insurgent Brexit Party at the request of the disgraced former Chancellor of the Exchequer and Prime Minister, Gordon Brown.

Just a week after the Electoral Commission gave a clean bill of health to the Brexit Party’s funding arrangements, they gave notice of another investigation just hours before their final election rally in London.

Their plan to investigate them again using Gordon Brown's accusations of impropriety as an excuse is a sure sign that the political class and the establishment are getting desperate.

The latest polls indicate that the Brexit Party will wipe the floor with the legacy parties which will signal the end of the establishment hegemony over British political life.

The peoples’ resistance is winning the battle against the political class but the democracy deniers are fighting back using every dirty trick in the book.

Widely regarded as an economic illiterate and complete imbecile, Gordon Brown seems to be a strange choice to front a politically motivated attack on a new political movement. This is until one looks at his political history and his previous clash with the Brexit Party leader, Nigel Farage, over Brown’s disastrous record as Chancellor of the Exchequer.

Rabid socialist Gordon Brown is an advocate of the New World Order (NWO) in which he wants to be a major player.

The European Union (EU) is an essential part of the NWO and Brown was determined to fully integrate Great Britain into the centrally controlled United States of Europe.

In an act of unforgivable treachery, Brown signed the Lisbon Constitution/Treaty which made the EU a legal entity and transferred what was left of British sovereignty from Westminster to Brussels. To compound his treachery, he did it without the referendum he solemnly swore to give the British people first.

Brown knew what he had done was an act of unforgivable treachery and being the coward that he is he avoided the original signing ceremony by sending a minion but then tried to add his signature later outside the public gaze.

He refuses to sit down for the traditional photo opportunity but luckily his treachery was captured on camera for all the world to see. 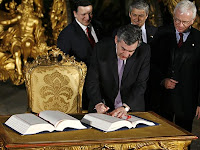 If the threat to Brown’s ambitions for the EU and the NWO weren’t incentive enough to go after the Brexit Party, his personal animosity with the party leader, Nigel Farage. most certainly is.

The clash took place a decade ago in the chamber of the European Parliament where Farage exposed Brown for the incompetent, economic illiterate he was by demolishing his carefully constructed image as a world economic leader.

I would highly recommend watching one of the most stunning three minutes of political video ever made and watch a carefully crafted reputation get deconstructed. The inane grin on Gordon Brown’s face is priceless.

Gordon Brown has waited a decade to get his revenge but his attempt will fail.

Like his friend and political soulmate Donald Trump, every attack on Nigel Farage only serves to boost his popularity.

It must be noted that the Electoral Commission itself is made up of government cronies who are all disciples of the European Union and they are committed to Great Britain remaining locked inside the failing nation building project.

We will find out on election day whether this politically motivated attack on the Brexit Party will succeed but win or lose Gordon Brown will always be an imbecile and the worst Chancellor in the history of British politics.

Posted by Daniel Thomas at 1:14 PM