Churchill and The Iron Lady Are Rolling In Their Graves 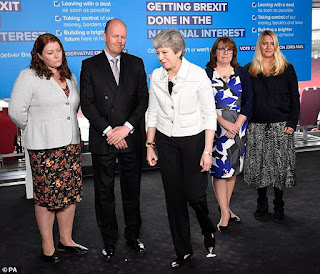 Embarrassing doesn't begin to describe the state of the British government. The Premiership of Theresa May has been an unmitigated disaster which has turned a once proud nation into an international laughing stock.

Her amateurish attempt to keep Great Britain locked inside the European Union while pretending to implement the result of the Brexit referendum has not only exposed her own deceit but also exposed the entire Parliament for the treacherous rabble of lowlifes they are.

The great Brexit betrayal and Trump style rallies have propelled Nigel Farage and his newly minted Brexit Party to the top of the polls for the coming European elections leaving the establishment legacy parties floundering in their wake.

The launch of the Conservative Party's campaign for the coming European elections was a total humiliation that should have triggered the immediate sacking of the hapless May.

Cowardice is now the hallmark of the Conservative Party leadership so she remains in place to finally consign the once great party into the dustbin of history. .

Mrs. May's launch of the campaign is perfectly encapsulated by the photograph above. The utter dejection on the faces of May and her candidates speaks volumes.

In contrast to the well organized upbeat launch of the Brexit Party,  Mrs. May's choreographed three minutes long launch was attended by two cameramen, a still photographer and a journalist who was allowed to ask a single question before the hapless Mrs. May walked off.

One could never imagine Winston Churchill or the Iron Lady subjecting themselves to such public humiliation but such is the state of British politics and the dire lack of leadership talent.

Mrs. May is finished, her Premiership is all but over so it's pitiful to watch her pretending she is in control while her friends and colleagues circle like vultures waiting to alight on the corpse of her political career.

The race to replace her is an undignified public scramble which is only adding to her humiliation. It's the modern equivalent of being bombarded with rotten vegetables while locked in the stocks on some village green.

Of the talentless shower scrambling to replace her, only the bumbling Boris Johnson has any profile and that's hardly inspiring but in the land of the blind the one-eyed man is King.

Posted by Daniel Thomas at 9:06 AM