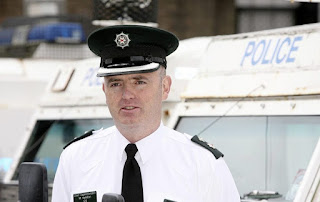 The intervention of a senior police officer into the European elections should be a great cause for concern for everyone who cherishes liberty, democracy and the inalienable rights endowed upon them by their Creator.

Assistant Chief Constable, Mark Hamilton, pictured above, has taken it upon himself to warn candidates to watch what they say during the European election campaign to avoid stoking racial hatred.

During an election campaign his duties as a police officer are to make sure the candidates are able to make their arguments in any way they choose without intimidation, physical or otherwise, and not advise them what they can and cannot say or the manner in which can they say it.

Outwardly Mr. Hamilton masquerades as a police officer but his comments and his job title reveal that he is an active political operative with an agenda to impose.

Assistant Chief Constable Hamilton is the National Police Chiefs Council Lead for hate crimes which is a political role if ever there was one. His job is not serving and protecting the public by applying the law equally and without favour but to impose the governments progressive agenda by rigidly policing political correctness depending on which community is involved.

Being a fully-fledged agent of the state and the ruling political class, his remarks are not aimed at the establishment Conservative, Labour and Liberal Democrat candidates but those who are posing a threat to the current political order and the status quo.

The Brexit Party and the United Kingdom Independence Party (Ukip) are campaigning to change the current political order because they have refused to implement the result of the Brexit referendum and leave the European Union.

The political class are fighting back against the people using everything in their power, and every dirty trick in the book, to prevent Great Britain leaving the EU. That means using the bought-and-paid-for mainstream media and the politicized institutions of the state, including the police ‘service’.

Ukip have always been smeared by the establishment as far-right, xenophobic, racist bigots who stir up hatred against Europe and immigrants. This deliberately misleading line of attack has been extended to the newly minted Brexit Party and anyone else who wants to leave the European Union.

This scurrilous campaign of denigration is used to generate fear and hatred of those who want to leave the European Union and is therefore hate speech by any description.

In an overtly party political and knowingly false statement, Chief Constable Hamilton told the left-wing Observer newspaper that “tensions are being stoked on a national level around our relationship with Europe, about cultural identity and about immigration more broadly”.

It doesn't take a genius to work that these remarks stoke up tension and are aimed at Ukip, the Brexit Party and anyone else who wants to leave the European Union.

Although they would like it to be otherwise, the Brexit Party and Ukip campaigns are centered around the failure of the duplicitous political class to implement the result of the Brexit referendum and not our relationship with Europe, cultural identity or immigration.

Deliberately ignored by the establishment, along with the media and Chief Constable Hamilton, both of these parties have made it abundantly clear that this election is as much about democracy as it is about leaving the European Union.

The only hate and violence during the campaign so far has come from those wanting to remain in the European Union who disrupt Brexit Party campaign events and assault its leader.

In another incident the police ‘service’ stood by and allowed a gang of Muslim thugs to attack and assault a legal campaign rally being held by candidate Tommy Robinson in Oldham, England. (See here)

This is the same police service that initiated an investigation because someone called the pro EU candidate, Anna Soubry, a nasty name.

With the advent of ill-defined hate speech and hate crimes the political class have given agents of the state like Chief Constable Hamilton the authority to police language with the intention of ending the British peoples inalienable right to speak freely and to publicly express their opinions.

Policing language is the precursor to policing thought itself so if Great Britain wants to remain a land of individual liberty and democracy agents of the state like Chief Constable Hamilton need to be removed from power along with the political overlords who put him there.

Posted by Daniel Thomas at 6:09 AM