Conservatives and Marxists Singing from The Same Hymn Sheet 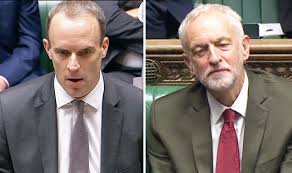 Watching the choreographed jousting by the politicians in Westminster one would think that the ideological divide between the supposedly capitalist Conservative Party on one side and Marxist Labour Party on the other was too wide to be bridged.

Spin and deception over honesty and substance is now the norm in politics as the ruling elite try to hoodwink the electorate in order to impose their agenda.

One must ignore the spin, the speeches and the rhetoric and pay attention the policy details of both parties to see they share a common agenda.

Although they claim otherwise the Conservative Party has long since abandoned capitalism, individual liberty and small government as a means of increasing the wealth of the nation to bring prosperity to its citizens. Instead they have become a party of social justice and government-imposed equality and fairness like their supposed ideological enemies.

If the gaggle of candidates jostling to replace the appalling Theresa May are anything to go by the British people are doomed to a future of high taxes, high spending and big government in a country crushed by rigidly policed political correctness.

The leader of the pack for the future leader of the Conservative Party and Prime Minister of Great Britain is the dripping wet liberal and social justice warrior, Dominic Raab. His campaign tag for his leadership campaign is “For a Fairer Britain” which is an echo of the Labour Party tag for the 2010 General Election “A Future Fair for All”.

On the biggest single issue of the day Raab has given little indication that he will fulfill the mandate given to the political class and free Great Britain from the European Union and its undemocratic, centralized institutions.

As Secretary of State for Exiting the EU he was responsible for negotiating Great Britain's withdrawal but he was comprehensively outmanoeuvred and humiliated by a group of dedicated Europhile civil servants who were determined that the country should remain.

Instead of killing off Theresa the Appeaser’s failed and discredited Withdrawal Agreement he thinks he can negotiate changes that will be acceptable to Parliament and the people. This is something the EU bureaucrats have made abundantly clear they will not contemplate.

He is repeating Mrs. May's dishonest mantra that we will be leaving the EU on the, 29th March 12th April, 31st October with or without a deal.

In line with the policy of Jeremy Corbyn's Marxist Labour Party, it looks likely Great Britain will remain locked into the despised EU should Dominic Raab take the helm.

Ignoring the wishes of the people, and in line with Labour Party policy, Dominic Raab intends to keep fire hosing 0.7% of Great Britain’s Gross National Product (GDP) on giveaway aid to foreign dictators.

While public services and infrastructure is starved of cash at home, this irresponsible largess is running at fourteen billion pounds per year and due to deficit budgeting every penny is borrowed and must be paid back with interest. With the national debt at record levels that interest bill alone comes to some forty-eight billion per year.

In common with the Labour Party, Raab plans to continue with the anti-science climate change nonsense which is killing energy dependent industries at home costing jobs directly and indirectly while increasing fuel bills for everyone.

This is putting pensioners and the less well off into fuel poverty where they are forced to decide whether its heat or eat.

Raab has given no indication he intends to put clear blue water between himself and the Labour Party on the burning issues of mass immigration, imposed multi-culturalism and forced acceptance of Islamic practises.

The wet-as-lettuce former Prime Ministers Tony Blair and David Cameron were forty-three and forty-four years of age respectively when they assumed the Premiership, and both proved to be complete and utter disasters in office. It’s fair to assume that the forty-four-year-old lawyer turned politician will also be too inexperienced to become a successful Prime Minister.

In conclusion, the signature policies of these ideologically opposed parties are so similar the consequences of their implementation will be exactly the same. High tax, high spending, high regulation, mass immigration and Islamification in country dominated by political correctness and still members of the hated EU.