Only Populists and Stupid People Love Their Countries 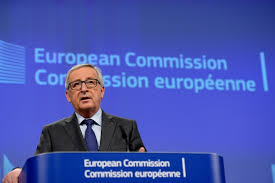 While people of the European Union were heading to the polls to elect members of the phony European Parliament, the unelected President of this manufactured non country has hit out at those who love their countries and yearn to be free of him and his cronies.

President of the European Commission, Jean-Claude Junker, does not believe in democracy or the independent nation state. He is an unapologetic globalist who believes that a supranational bureaucracy made up of self-appointed ‘experts’ like himself have the sole right to govern.

For someone with an aversion to the truth, Junker’s outburst to CNN was uncharacteristically candid where he makes public his contempt for the independent nation state and the people who believe in them. (See here)

Being the arrogant petty dictator that he is Junker cannot understand that increasing numbers of people across Europe do not want to be part of his remote, centrally controlled superstate that has destroyed economies with its single currency policy and wreaked havoc on citizens with its open border mass immigration policy.

With the polls predicting a majority for Eurosceptics after the elections one would think that Junker and his cronies would consider a change in direction but no such luck;  the course was set decades ago for a borderless, centrally controlled, multi-cultural United States of Europe and they cannot, or will not, change direction.

He contemptuously dismisses those who believe in nation state democracy as populists and stupid nationalists that love their own countries while hating the EU. Playing the race-card he claims that ‘they don’t like people who come from far away while he does like people coming from far away’.

Justifying open border mass immigration Junker states that “we have to act in solidarity with those who are in a worse situation than we are in”. This is despite the fact that abject poverty is already rife in his EU especially among the Eurozone and the former Soviet controlled eastern European satellites.

The world outside the European Union may not be aware that the European Parliament is a fake legislature since it cannot initiate or repeal legislation, that is the sole prerogative of the EU Commission of which Jean-Claude Junker is the President.

The Commission is made up of twenty-eight Commissioners who like Junker are appointed not elected therefore they cannot be removed by popular ballot no matter how destructive they may be for the citizens of the nation states.

The legislation, rules and regulations that these anonymous bureaucrats impose upon five hundred million people overrides any legislation passed by elected national Parliaments. Those national leaders that do not toe the line are removed or smeared and vilified while their countries are subject to sanctions until they conform.

By any measure this is a dictatorship which cannot be removed by popular ballot, and as the British have learned to their cost, not even by a legally binding referendum.

In conclusion: President Junker along with the rest of his unelected cronies are the petty dictators that have been imposing their destructive project on the people of Europe for decades.

She will always be known as Theresa the Appeaser. 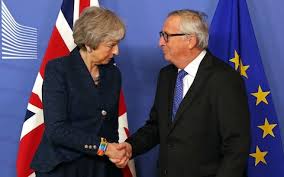 Finally, the ruling elite takes care of its own, so to supplement her gold plated, taxpayer funded pension she will most likely be given a well-paid sinecure somewhere in the fetid swamp of globalist politics or a seat in the House of Lords.

Posted by Daniel Thomas at 8:55 AM